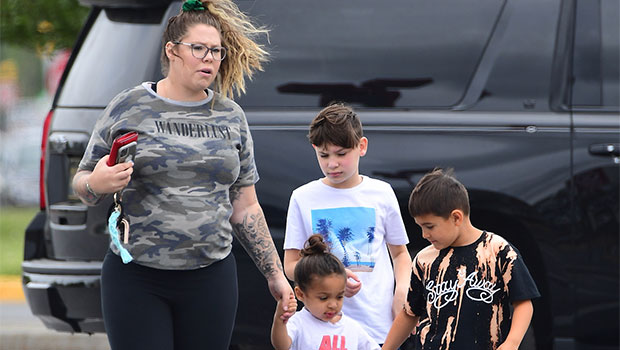 Kailyn Lowry has four children, but isn’t going to be spending Christmas with any of her sons. She just revealed the sad reason why she’ll be alone on the holiday.

It isn’t going to be a very festive Christmas at Kailyn Lowry‘s house, as her four sons won’t be waking up and spending the holiday together at home. Instead her boys are going to spend the day with their respective fathers, because it just became too much for the Teen Mom 2 star to coordinate her holiday plans with her exes and their families. She revealed the “sad” situation on the latest episode of her Coffee Convos podcast on Nov. 20. She begins speaking about the situation around the 13 minute mark below:

Her co-host Lindsie Chrisley asked the 28-year-old if her sons were going to do a gift exchange and the mom of four revealed, “We’re not doing anything. Like, I’m just not gonna have them. So, they don’t have to, like, get each other stuff….I might ask them, ‘Do they want to get each other anything for Christmas?’ And if they say yes, then I would just obviously facilitate that.”

Kail then explained, “They’re going to be with their dads until the end of Christmas day, so I feel like maybe then it would be over. But then it might be nice for them to get each other something, so we’ll see.” That means her 10-year-old son Isaac will be with his dad Jo Rivera, seven year-old son Lincoln will be with Kail’s ex-husband Javi Marroquin, and ex Chris Lopez will have Kailyn’s two youngest boys, Lux, 3, and four-month-old Creed.

It isn’t going to be a new situation, as Kailyn spent last Christmas alone as well. “I don’t think last year we did anything last year at all….As a matter of fact, I know nothing happened last year on Christmas. I know that because I was by myself almost the entire day,” she said. “So, yeah, we didn’t do anything. And then once I got the kids back, I got the kids back and we just went on about our lives.”

Lindsie told Kail that she would be “devastated” by that kind of situation. “It is kind of sad, and I get that. I definitely get that,” Kailyn admitted. “I just feel like it’s a lot. And the amount of money that I was spending on, like, Christmas gifts and then I was only getting them for half the day and then I had to share. I don’t get to go to my family because my family, Jo’s family and Javi’s family are all in different areas and then when we added Chris to the mix. It was just like there was just so much going on that I was never going to have three happy dad situations.”

“And then it was stressing me out to, like, have one back by 4 o’clock, one back by 7 o’clock,” Kail explained. “And even though the custody orders say the same thing, it was almost, like, okay that’s a default. So, we tried to agree on, like, other things that would work and I just couldn’t make it work to the point that like, everyone was actually happy about it.”

Kailyn has primary custody of her four sons and makes sure that they get together with her relatives on special occasions outside of the holidays. “I see my family, like, twice maybe three times a year,” she explained. “And so, it just didn’t make sense for me to, like, do this. And then they have families. Like my family has their, you know, significant others’ families or whatever. So, to me, I’d rather just set up two times in the summertime or something else with my family and then go from there. Like, Christmas is just…I just can’t.”

While Kail admitted that Christmas is “so canceled,” she said “I’m super excited for Thanksgiving though,” as she’s going on a trip with her four sons. “I’m going to Texas to see my best friend and her kids, and my kids are super pumped,” Kailyn shared. “So, we’re gonna be there for the week and that I’m very excited about — but not even because of the holiday. Like, I’m just excited to see my friend.” Well, that should at least partially make up for being alone on Christmas.

‘Juno’ Star Elliot Page Comes out as Trans
‘Blood of Zeus’ Season 2: Renewed By Netflix for Seasons 2 & 3
Detroit Lions’ Head Coach Spoils Daughters’ Marriage Proposals In Epic Slip-Up
Lisa in ‘Sugar & Spice’ ‘Memba Her?!
When will Seasons 4-5 of ‘Outlander’ be on Netflix?